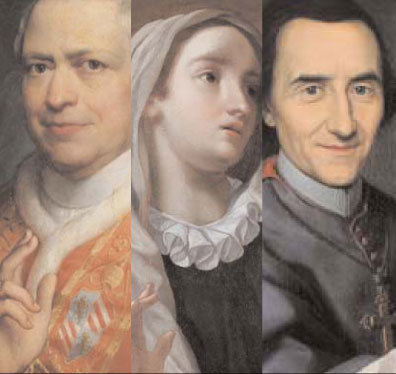 The cost of admission is by donation 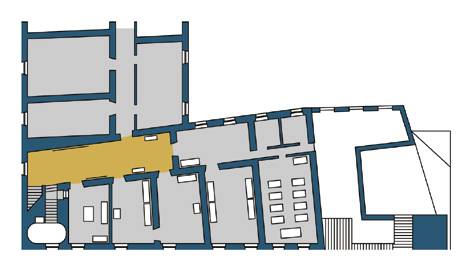 The museum is placed in the area where Marcucci lived during the last years of his life.
In the first room we visit there are many pictures reproducing  the most important moments of Marcucci’s life.

The first picture was made by Nicola Monti in 1770: it represents the moment in which Marcucci became bishop. In fact he has on the right hand the ring he received during the ceremony of  investment of bishop.
In the same picture we can also notice that the hand has the finger up to indicate the imagine of the Immaculate Conception who is the inspiration of  Marcucci’s life and work.

On the walls we can admire a series of little pictures reproducing the most significant moments of Marcucci’s life.

The first of the twenty little pictures, made in 1961 by the ascolan artist Dino Ferrari, shows us the birth of Marcucci: in fact we can see the child with his mother and father and the Virgin to whom his parents entrusted all his life.

The second little picture reproduces one of the moments of particular devotion to the Virgin.

The third picture shows us the moment Marcucci decided to let his family know  he took the decision to become a religious. This was a hard moment because Marcucci was the last son of a noble family, his father was a lawyer, so he wanted his son to carry on with the family and the work too. In the pictures we can see Marcucci dressed like a religious with his father, his uncle and his aunt who substitutes Marcucci’s mother, who died when he was a child.

In the fourth picture we can see Marcucci and S. Leonardo from Porto Maurizio. Leonardo was a fine missionary; this is an important presence in Marcucci’s life because he learned from this missionary how to be a good preacher: in fact the inspiration of Marcucci was to help people to learn the most about religion and a good practice like the experience of a fine missionary was very helpful.

In this fifth picture  we can see Marcucci preaching in the places of  Marche and Abruzzo with the Cross that he used to carry on with him during the missions.

In this sixth picture we can see the ceremony in which Marcucci  was ordered priest in 1741 in the Cathedral of Ascoli.

In this seventh picture Marcucci is named bishop in 1770 with a ceremony in the Church of  Piceni in Rome.

The eighth and ninth picture reproduce the consecration  of the first four sisters; it was the 8th  December 1744 in the Church dedicated to the Saints Vincenzo and Anastasio. The first sisters received the religious dress and after the ceremony they went in the Monastery  where Marcucci gave the keys to the first Mother Superior, Sister Maria Tecla Relucenti.

In this tenth picture there is the reproduction of a moment of joy in the school.

In this picture there is a lesson of Marcucci to the sisters for whom he wrote many books about all the different subjects of the school: Grammar, Maths, Drawing, Music, etc…

In this picture there is the reproduction of Marcucci with S. Paul of the Cross who made a prophecy to him: he said to Marcucci that his work should have had a prosecution and he would have been proclaimed saint.

In 1792 the Pope had a journey to Vienna (Austria) to talk with the Emperor Joseph the Second about relations between  the State and the Church: he asked Marcucci to go with him, to be his confessor and to help him in this important mission.

In 1798 Marcucci died in a room of the flat where he spent the last years of his life; he was 81 years old.
During the last years the apartment has been  transformed in the museum dedicated to Marcucci’s life and  work.

The picture reproduces the Pope Pius the Ninth during the visit of the Monastery in 1857; he had this journey three years after the proclamation of the Mystery of the Immaculate Conception.

The other elements we can see in this room are also the original desk made on walnut wood used by Marcucci to write.

On the sides of the room we can also admire ancient  restored benches.

Next to the to the second room’s access door there are two beautiful big ancient candelabras which were originally in the Church of the Monastery .

In the left window there are several documents: in fact we can see several books containing the “constitutions” in the different years they were printed: the constitutions are all the rules that the religious sisters should observe during their every day’s life.
In the lower part there are the “affiliations”, documents used to become affiliated to the other religious orders: there were 27 orders affiliated together when Marcucci died.

Above the window we can see the authorisations that the Pope Pius the Sixth gave for the constitution of the religious congregation and for the construction of the Monastery.

On the right side we can see the window containing other interesting documents like the plant of the Institute and the reproduction of the original 17 little buildings bought for the realisation of the Monastery: a part of them was destroyed and rebuilt, like “Garulli palace”, which was originally a noble building with a tower that we can still admire in the cloister.
In the same window we can also see the pictures of the two lawyers (Corso Donati from Florence and Giuseppe Mazzocchi from Ascoli) who, with Sister M. Serafina Saladini, prepared the cause against the Kingdom of Italy which took all the religious order’s properties. 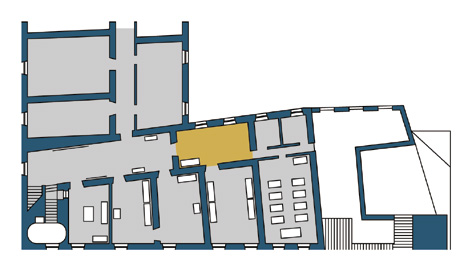 Mother Tecla Relucenti,the first Mother Superior of the Congregation, a woman coming from a rich family. She was a friend of Marcucci since when she was young, because of their families’s friendship.
Beside we can observe her personal objects used for praying and for every day’s life like plate and a statue which represents Jesus tied up.
The thirth Mother Superior reproduced is Sister Maria Beatrice Capozi; she  wrote the biography of Marcucci.
Sister Maria Petronilla Capozi had a good Latin culture: she wrote many Latin letters and theological books.
Saint Beatrice De Silva foundress of the Sisters of the Immaculate Conception in Toledo, Spain; she gave to Marcucci the inspiration for the choice of the dress for the Pious Workers of the Immaculate Conception.
Little statue reproducing Sister Carlotta Merli with her religious dress.

Vases with the initial letters of the name of Maria and various objects. 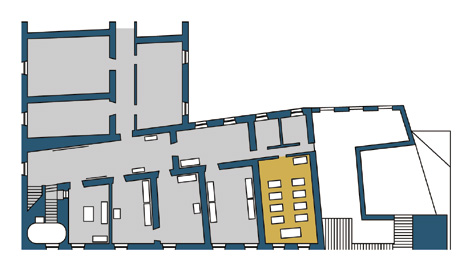 The third and fourth room on the left side are dedicated to the Missions of the Worker Sisters of Immaculate Conception in Brazil, Philippines and Madagascar: we can observe various objects all handmade in these lands. 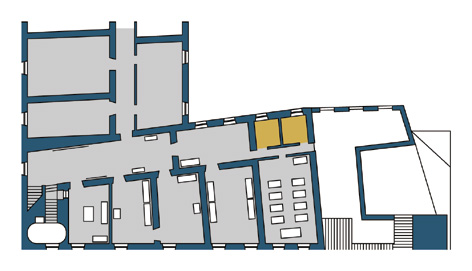 On the right side we can observe a classroom with authentic restored  and  transformed ancient desks in exposition. In fact we can see many examples of school works and texts, and all the handmade stuff, that the students should learn to make.

On the right side we can also observe the original manuscripts written by Marcucci concerning several subjects: music, maths, grammar, the art of drawing, the art of knowing etc… 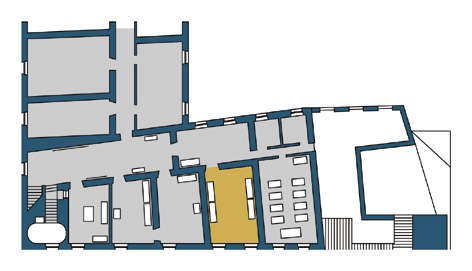 Up to the window we can observe a picture of the ancestors  of Marcucci’ s family.

On the right window there are the reproductions of various saints which gave an inspiration to Marcucci’s mission, a plant reproducing all the places in Marche and Abruzzo Marcucci visited during his first years of mission, some punishing instruments and the reproduction of choreographic schemes used during the celebrations. Marcucci had the conviction that everything should have a sense, even the position of persons during the celebrations.

In the same window we can also see the diary, written during the travel to Vienna with the Pope Pius the Sixth to treat important questions concerning the situation between  the Church and the State with the Emperor Joseph the Second. 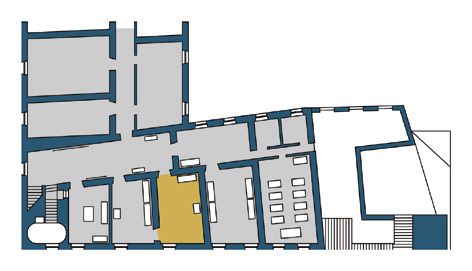 In the sixth room, dedicated to the Pope Pius the Ninth, there are many objects used by the Pope during the visit he made in 1857 to meet this community dedicated to the Immaculate Conception, that he proclaimed as a “dogma” in 1854.
In the central part of the room we can see the chair used by the Pope to permit the sisters to Kiss his feet.
On the side we can also notice another chair used by the Pope entirely handmade by the sisters, and above we can also admire a reproduction of Jesus initial letters, entirely handmade by the sisters too.
On the right side we can observe four pictures, which belonged to Marcucci’s family representing scenes of Jesus life. 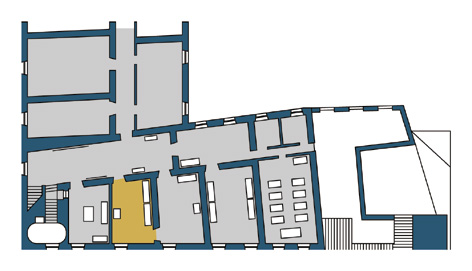 In the other side of this room there is a window which contains several religious dresses  all  gold laminated. 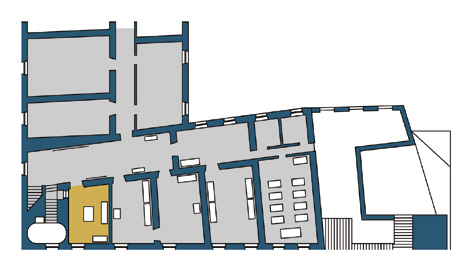 In the eighth room, dedicated to Saint Emidio, there are a lot of reproductions of the Saint, who was the first bishop in Ascoli during the Diocleziano’s persecutions.
Saint Emidio was killed by the cut of his head and he promised to protect the town of Ascoli Piceno from earthquakes and all the other natural disasters and calamities.
The first reproduction of this saint is dated 1604 and it belonged to Marcucci’s family: on the mantel of the Saint there are reproduced the Apostles and on the glove of the Saint we can see the Eucharistic symbol.
On the opposite side we can observe another picture reproducing the Virgin Mary with the Child and two Saints: Saint Emidio on the left side of the picture, and Saint Francesco from Assisi on the right side. Next to Saint Emidio  there is an angel carrying a miniature of Ascoli, to demonstrate that the town is under their protection.
On the side there is a window which contains many little objects which belonged to various Saints.
In the other window there are several objects used for the celebrations.

In the central window there are the dresses used in the celebrations with the reproduction of the symbols of the Virgin. 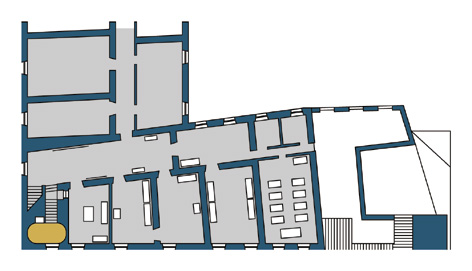 During the last years of his life, Marcucci lived in this area of the Monastery and he ordered to build a little Chapel in his apartment where he could celebrate the daily rituals, like the mass and other celebrations.
In the little Chapel we can observe several objects used by Marcucci for the celebrations.
We can also admire the frescos reproducing the Immaculate Conception with  Saint Emidio on the left side and Saint Antonio on the right side, the altar used for the celebrations with many religious objects and a fresco on the roof reproducing angels with the Holy Spirit which has the form of a dove and the symbols of the Virgin.
The pavement of this Chapel is original.

On the side there is a picture reproducing Marcucci: it shows him  indicating the Virgin Mary, who is the inspiration of all his life and works.

The life of Francesco Antonio Marcucci